Morocco, the World of Color 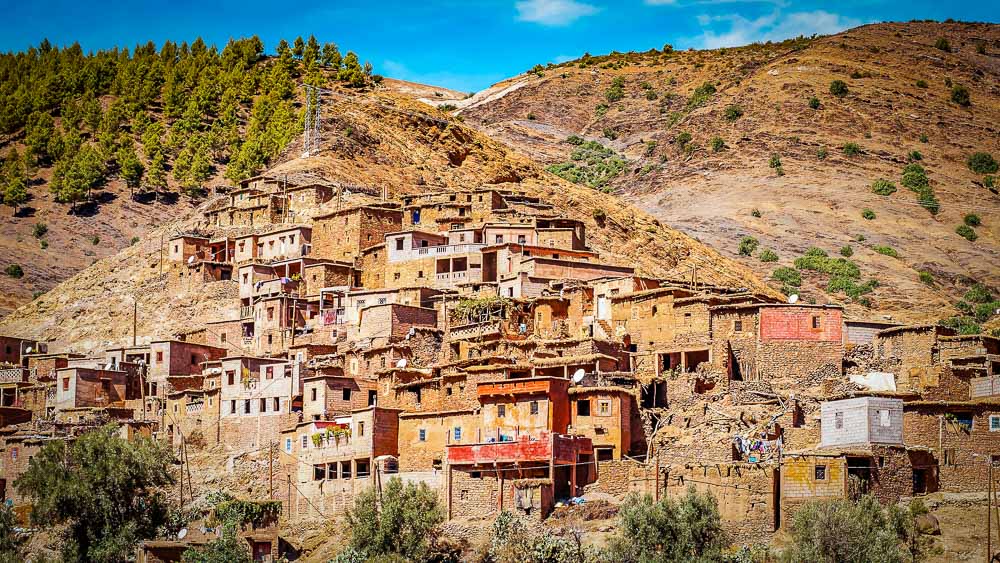 For westerners, Morocco holds an immediate and enduring fascination. Though just an hour’s ride on the ferry from Spain, it seems at once very far from Europe, with a culture – Islamic and deeply traditional – that is almost wholly unfamiliar. Throughout the country, despite the years of French and Spanish colonial rule and the presence of modern and cosmopolitan cities like Rabat and Casablanca, a more distant past constantly makes its presence felt. Marrakech maintains a life still rooted in medieval times, when a Moroccan kingdom stretched from Senegal to northern Spain, while in the mountains of the Atlas and the Rif, it’s still possible to draw up tribal maps of the Berber population. As a backdrop to all this, the country’s physical make-up is extraordinary: from the Mediterranean coast, through four mountain ranges, to the empty sand and scrub of the Sahara.

It’s really easy to eat well for dirt cheap in Morocco. The average price will be around £5 for a simple Moroccan curry and flatbread, or roast chicken and rice in a restaurant. Even cheaper are street stalls and fast food shops. You can get steamed broad beans, roasted nuts and barbecued corn on the cob on the street, and hot roasted chicken or huge sandwiches stuffed with french fries and mayonnaise from Rotisserie shops. Another cheap meal is Harira – a soup of lentils, chick peas, tomatoes and vegetables, served with bread.

Make sure you try a tagine, a spicy stew of meat, dried fruit and vegetables, served with heaps of couscous, or pastilla – thin pieces of flaky dough layered with sweet and spiced meat, almond paste, and dusted with icing sugar. Typical Berber dishes include Kaliya, a dish of lamb, tomatoes, bell peppers and onions.

Enjoying the beach and seafood of Essaouira

My favorite city in Morocco, Essaouira is located a few hours from Marrakesh on the Atlantic coast and is a popular beach destination for tourists, especially Brits. I loved the relaxed atmosphere of the city, the lack of pushy touts, the sea air, and all the fresh fish.

Be sure to visit the wonderful fish market in town, where all the small fisherman sell their day’s catch. Afterward, check out the small fish stalls nearby in the main square where you can enjoy fresh seafood grilled really cheap.

Marrakech was everything I thought it would be: a modern mix of Moroccan and international culture with the most diversity of delicious international food and beautiful architecture in the medina. Though Marrakech lacked the grit and edge of the rest of the country, it was the most eclectic city on the trip.

The chaotic pace exposed a city and people always on the go. The famous Jemaa el-Fnaa square is truly the mess everyone describes: tens of thousands of people at night eating, shopping, getting henna tattoos, listening to bands and storytellers, and watching magicians (and snake charmers during the day). It’s one of the most hectic but fascinating people-watching places in the country. It still blows my mind how big and full it was!