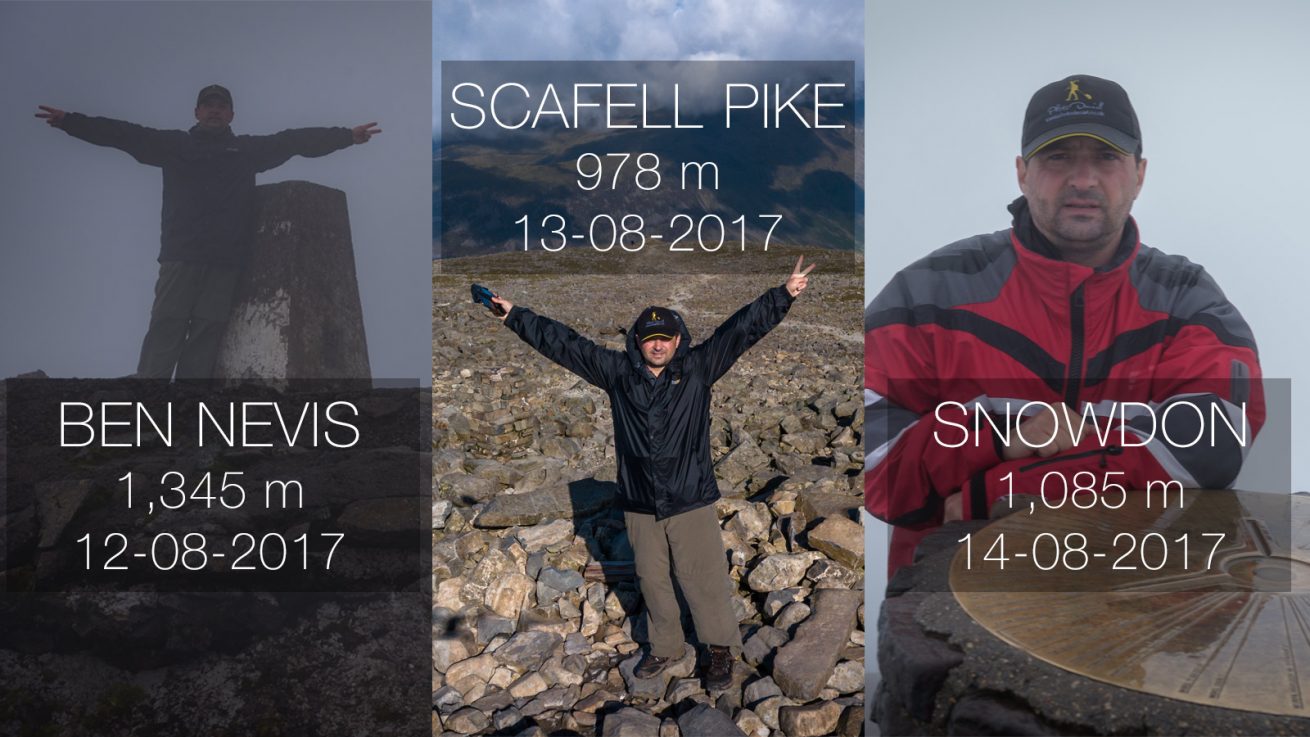 It all started after I turned 40. I was obsessed with the idea of making some change in my lifestyle that was quite sedentary. As a photographer, I travel often, but at the same time, I spend a lot of time in front of the computer or driving.
Working on my project “Photographing British Coastline” I have the opportunity to go out quite often, to hike along the coastline, to enjoy the sunset or sunrise, to take a breath of the sea breeze or enjoy a bit of piece of quiet and tranquillity. But I wanted something more, I wanted a challenge that would make me reach my limits or even exceed them.
In one day, a friend of mine told me about “The Three Peaks Challenge,” I started searching for more information… The highest peaks in Scotland – Ben Nevis: 1,345 m, England – Scafell Pike: 978 m, and Wales – Snowdon: 1,085 min three days, It sounds quite challenging and I said to myself, why not, I think that is what I need. Some people make the three peaks in 24 hours, it’s a little difficult for me because I am not fit enough and I will be driving between locations. I also wanted to take photos and videos throughout the trip, and this requires taking the camera with me during hiking, some lenses, the drone and the tripod. All of this weighs about 10 kg. But three peaks in three days are a challenge for me so… hit the road, Daniel.

I decided to make the trip starting 11th August 2017, because I had a few days off during that time. So I started the preparations.

3:30am on 11th August 2017,  I am on my way to Fort William, 9 hours drive, weather looks ok. After I crossed Loch Lomond, the rain started, first a few drops, then heavy rain. I reach Fort William around 2 pm, I have done some laps around the city and I stopped to a local bristo to have a traditional Scottish smoked haddock soup and of course haggis. The weather forecast was optimistic for the next day, in fact, after 4 pm, the sun started smiling and encourages me.

4:00am on 12th August 2017 – I was already in Ben Nevis Car Park, ready to hit the road. I have reach the summit after 4 hours and 40 minutes, that including breaks for taking pictures and video. The weather was very good in the first three-quarters of the route, amazing for photography and then the last quarter was foggy and cold, the temperature was around 2 degrees Celsius on top. But more about Ben Nevis adventure and lots of pictures in a Ben Nevis post

4:30am, on 13th August 2017  – Scafell Pike hike from Wasdale, path up alongside Lingmell Gill and then climbing up to Mickledore Col. The weather was lovely, some clouds on the sky make it perfect for photography, no wind, temperature around 15 centigrades. I have reach the summit after 3:30 hours. On the way back, I have decided to follow The Corridor Route, with Great Gable to the right. But more, including photo and video on the special post about Scafell Pike.

9:00am, on 14th August 2017 – I started climbing from the lovely Llanberis. Llanberis is a wonderful place with amazing people. Llyn Padarn has a great photographic potential, and at the foot of the mountain is Cewant Mawr Waterfall, a wonder of nature that you do not get tired to watch – try this at sunrise. Being the last day and rainy weather, I started climbing at 9 am o’clock. The was route is very easy in good weather conditions, but unfortunately for me, the second half of route, shower started, and heavy wind, at one point I had to squat down so the wind would not blow me. I manage it and I got to the summit after 3 hours. I have done few pictures, but not as I many I wanted because of the rain, every square centimetre of my clothes were wet. More about it and pictures on Snowdon post.

It wasn’t easy, but I have done it, nothing compared to the satisfaction of a large smile :). When you are on top you feel completely free, happy and full of positive energy. The effort made during the hike does not compare to the feeling that you are there.

I’m looking forward to the next challenge, may be 24 peaks, maybe the Alps… I will see that,
Thank you very much for your time reading this.

Statistics after the entire trip: I drove 1206 miles according to my car dashboard records, and I walked 39 miles or 89.125 steps according to Health Data iOS app.